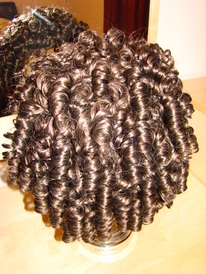 Priced between £74 and £85 the Caitlin wig is fairly reasonable in price but beware.......

Packaging: The Caitlin wig comes in a standard white box with colour label on the outside and is standard so there isn't much to say about presentation apart from the fact it is normal. Again one thing that Irish dancers find hard to get is decent hair nets and it would be nice of they would include one or two with the wig.

First Look: The wig comes out of the box looking great with the curls in place and a nice sheen and no obvious flaws. Length is a lot shorter than expected seeing as the Caitlin wig is supposed to be the 'longest and fullest wig...' according to the suppliers. It is also described as a loose curl wig which mine are not. Hopefully the curls will drop upon use. Two combs front and back and the usual netting internally are pretty much standard.

First Use: The wig fits well, and looks good although much shorter than the pictures, ours is a dark brown No8. The wig is conditioned, fitted into place, tiaras and headbands added and we are off. The wig feels lighter than some wigs however we put this down to it being a 'loose curl' and it looks good on stage with lots of bounce. After we finished we took the wig out carefully as normal and noticed there was some 'frizzing' which was a little unusual as it wasn't only where the headband was. We also noticed that the wig hadn't really dropped and therefore was nearer shoulder length and not nearly as long as shown in the pictures neither had the curls loosened much.

Ongoing use: Over the coming 3 feis' the wig was conditioned and 'hung out' and all pins removed and it was noticed that there was an abnormal amount of 'frizzing' to the point that we sent the wig back to Celtic Creations as faulty. Celtic Creations returned the wig saying the frizzing was normal and we were to follow care instructions and condition the wig.....guess what? WE WERE DOING THAT ANYWAY. We continued to give the wig the same care over the next 3 feis making it 7 in total then reviewed the wig and it's condition.

The wig had serious 'frizzing' in areas that were not in contact with any tiaras, headbands or dress. Under the rear of the wig the hair had matted and was unsalvageable having to be cut out. Trimming the frizz off a wig is standard procedure however upon doing so we found that the main culprit for the frizz is the 'light' fibre found in the wig and 80-90% of the hair cut out was made of this. It appears that this lighter fibre may be the one used to create the loose curl, however the darker fibres seem to have a tighter curl leading to a mismatch and problems. The wig has now had two sessions of about an hour and is hanging on in there but unless you are an experience dancer of parent you won't like the workload that comes with the wig.

To check this wasn't a one off we have another Caitlin wig, and it too is following the same course as the 1st one so it is unlikely to last a year in our opinion. There are many common complaints about the wig with some being sent back (ours was but CC denied any fault) and other dancers complaining about frizzing and the lack of length.

Celtic creations can produce good wigs, and it appears that the lighter Caitlin wigs do better (is it the white fibre?) but when compared to the Aoife and other makers wigs the Caitlyn aint one of them. It would be wrong and irresponsible of us to recommend this wig for either novices or those who don't have limitless pockets, and personally we can say these are the worst 2 wigs we have ever bought.

The picture above is after one feis, and at close up we can see those niggling light coloured fibres breaking free. Please note the length isn't exactly shoulder or below.

We notice Celtic Creations has launched a new wig the Danielle and hope this one is better.

This is the back of the wig after one wear, you can see it starting to matt, and after 3 wears we had to cut out a chunk of the fibres. Note the fact that the matting seems to be a higher percentage of the lighter fibre. In a nutshell £74 - £85 and disappointed after one wear isn't exactly impressive is it.

As you can see the wig has lost most of it's shape, the curls becoming tangled and disordered. Those niggling white fibres are everywhere and it hasn't dropped much from when we first received it. This wig has had two one hour sessions of cutting out, and it does improve the wig, but on a value for money front its a definite no.

We would like to point out that trimming of the wig consists of removing any stray fibres NOT actively going into any existing curls and removing fibres or destrying the shape. Also the wig has been conditioned before and after every competition and is stored in a light free dry environment.

This is a view of the front and side, again the frizz is terrible and many of the curls have become tangled and lost their shape.

We would like to point out that trimming of the wig consists of removing any stray fibres NOT actively going into any existing curls and removing fibres or destrying the shape. Also the wig has been conditioned before and after every competition and is stored in a light free dry environment.

Like most people, the first time we noticed this wig and our ears pricked up was at a feis, and it looks great. We also saw pictures online through suppliers which present an interesting loose curl, more adult style as opposed to those bun wigs that look like they should have a lead and a poop bag attached.

The most unusual thing about it is the fact that it doesn't come with a drawstring. On first look you will notice that it is an elasticated cuff on the base of the wig which loops over the donut or hair and holds in place. Needless to say this isn't secure enough so we looked to pin the wig in place.......................and found that there isn't a conventional mesh in this wig so hairgrips/bobby pins can't be pushed into the hair.

We have spoken to several wearers and have been advised that the way to fix this wig is to pin the bottom layer of wig to the dancer's hair and this holds it in place.

We will get back to you when we have tested further.